Vegan athletes and their dogs 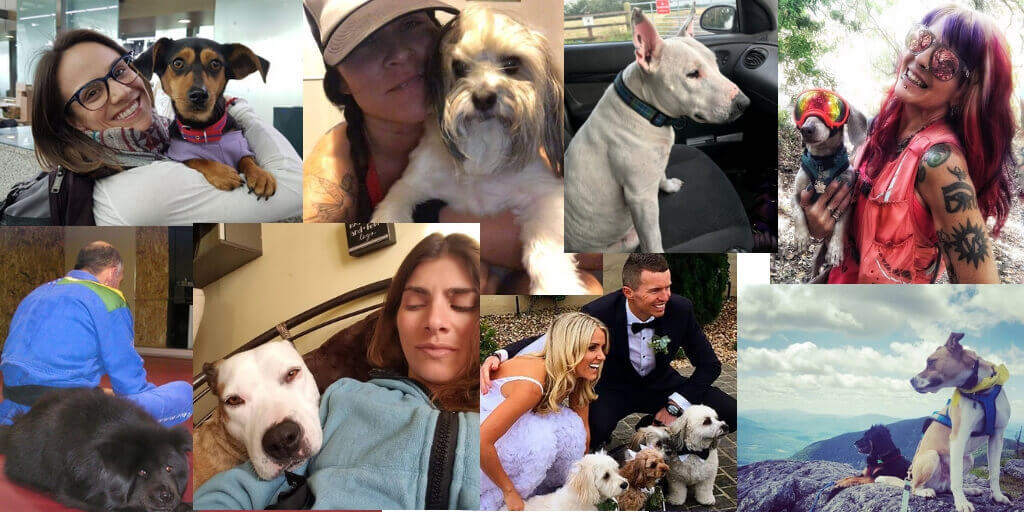 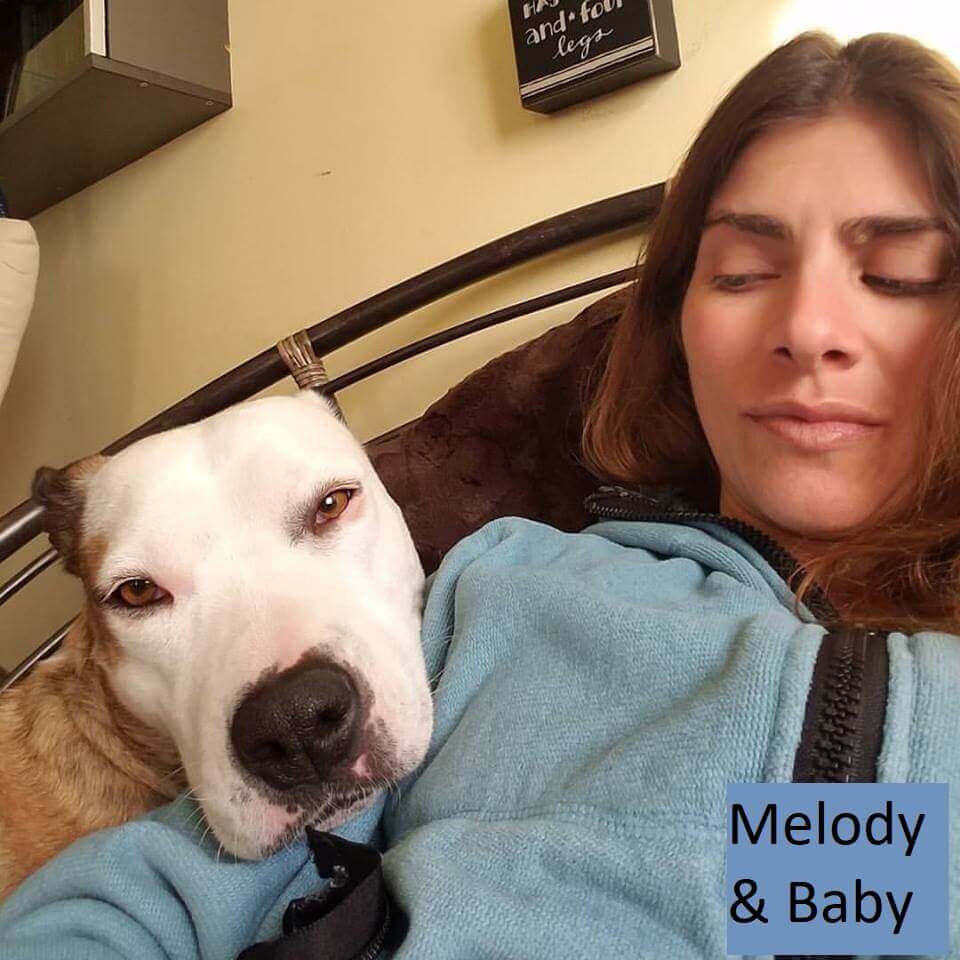 Don’t let Melody Schoenfeld’s size deceive you – the petite, five foot personal trainer has broken a US national powerlifting record and for fun enjoys strength challenges like tearing phone directories and bending iron bars and car number plates. She’s been vegan since 2000 and once told us “I have been slowly heading that way since I was maybe 5. I have always been a huge animal lover.”

She lives with Baby, a pitbull cross Melody found on the street. “She had been abused, never been indoors, never been on a leash, nothing” says Melody . “She was afraid of men and loud noises. I have done a lot of work with her. She's still skittish around some men sometimes, and she hates trucks and buses (except for the UPS truck, because she loves my UPS driver!), but for the most part, she's become so much happier and well-adjusted. I try to give her as many experiences as I can.

"I take her hiking or stair climbing in the cooler months and take her kayaking in the summer when I can. She's still getting used to the kayaking but does really well. She comes to the gym with me on Monday nights and helps me train my clients. She's the brightest light in my life." 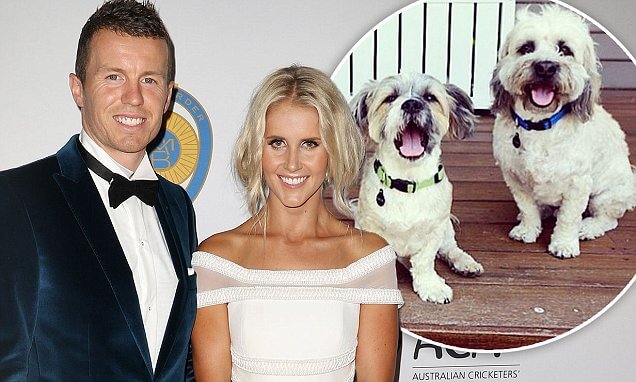 Aussie cricketer Peter Siddle has been vegan since 2013, explaining: “animal cruelty played a huge part in my decision to go plant based. After learning a lot more about the processes of factory farming, battery hens, abattoirs etc, I realised that the meat industry was something I wanted nothing to do with.” The fearsome fastbowler married in 2017, although a British newspaper said at the time that he was upstaged by four of his guests. They were referring to his rescue dogs, who were a big part of the day’s celebrations.

Axel, Oscar, Ralphie and Willow seemed to enjoy the day, where all the food was entirely vegan. Oscar had already been involved, as he’d carried the engagement ring on his collar two years previously when Peter proposed. 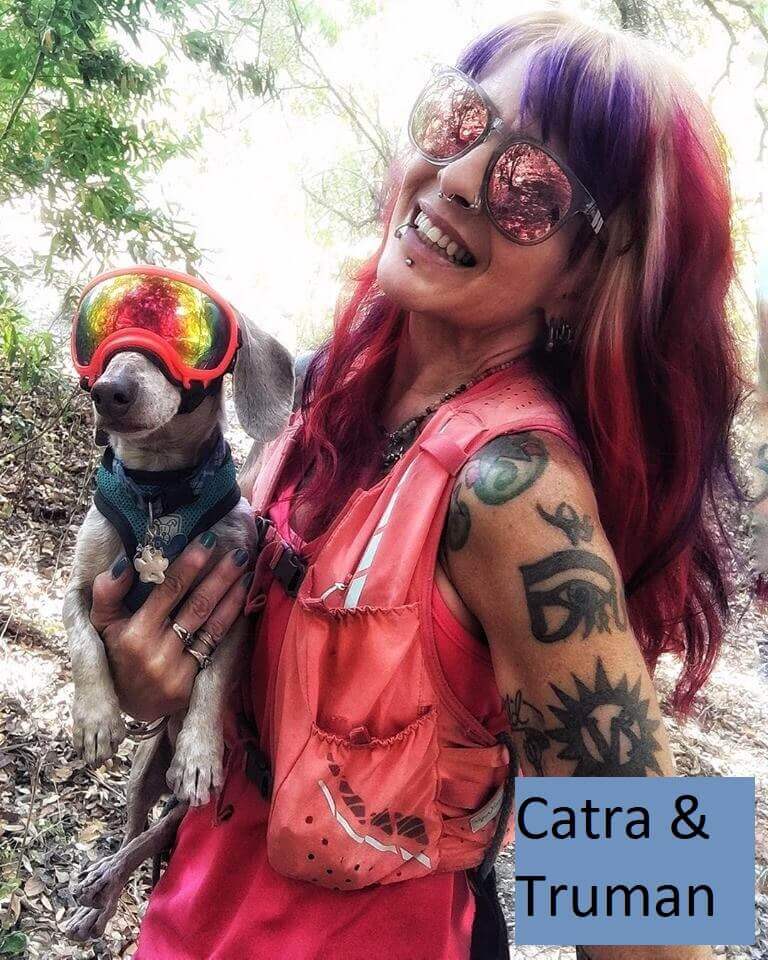 Ultradistance runner Catra Corbett turned changed her life when she gave up the alcohol and illegal drugs that were killing her – and embraced running. She has since run over 100 races at the one hundred miles and set a course record for the 424 mile out-and-back John Muir Trail course.

When her well loved dog companion Rocky died, Catra was heartbroken, although she later realised there was room for another dog in her life. She adopted Truman, a little Doxie who often trains with her. On a recent attempt at a course record for a 310 mile trail, 12 year old Truman joined the 53 year old Catra for parts of the course, and helped her towards a course record.

Truman regularly appears on Catra’s social media channel and has become a star in his own right.

Fiona Oakes is best known for two things – amazing running achievements and dedication to animals. She has broken records related to marathon running including course records at the North and South poles, and has completed the Marathon des Sables in extreme heat. She holds several Guinness world records.

The sanctuary owner made friends last Christmas with Sugar, an English Bull Terrier found literally crawling on London’s streets in the pouring rain by Niall, a dog warden who said she was among the most abused, neglected and pathetic cases he had ever encountered. Advised to have her put to sleep, Niall arranged to have her rehabilitated. Sugar recovered mobility in her almost paralysed back legs, and was looking for a home when Fiona’s parents were offering one.

“Progress was slow but after a month or so she had become unrecognisable in her mobility and energy levels and the ‘little old dog who just wanted a place by the fire to rest her head and end her days’ had become a positive fire-cracker of energy and excitement” explained Fiona. One evening Sugar seemed keen to come with Fiona as she went off to a sea wall to train.

“From that point on our Sea Wall sessions have become a fixture of my training and hers. She loves it and makes for great company and distraction when my legs are heavy and my mind is wandering. She also is a great motivator as, if I don’t want to go out, she certainly does and lets me know it too. In the end, to keep the peace I have to don the running kit – so I could say she doubles as my Coach too. So we both get the benefit of the exercise and it’s added another dimension and purpose to my training –something I am always looking for when doing such volume of miles.

"It’s also just a great way of getting out there and experiencing nature, sharing and spending more time with one you love so much as often it’s frustrating when you have a busy schedule to have to take time out for the solitary experience of training.” 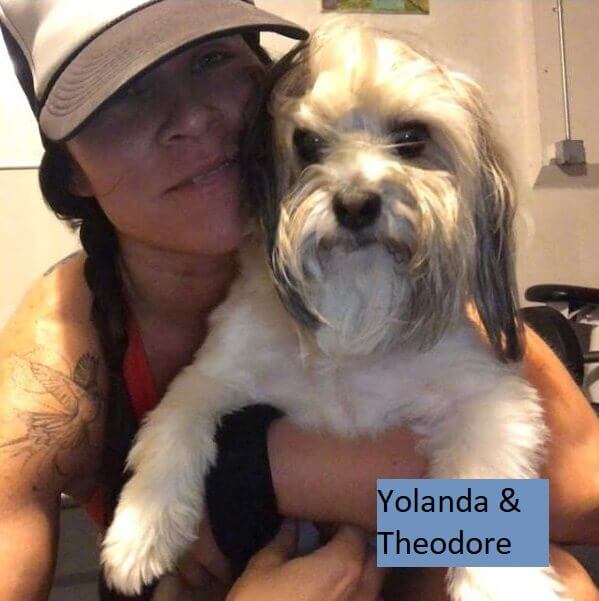 Yolanda Pressword has applied a gritty determination to powerlifting and in a short time in the sport has broken California records as well as taking the US national record in squat.

She turned vegan in 2010 after discovering about the extreme cruelty of the animal agriculture industries.

Theodore James Presswood is a five year old Papitzu who joined the family after their previous dog died, and has played a remarkable role in helping Yolanda with her Post Traumatic Stress Disorder caused by earlier life events.

“We went to meet T and fell in love” says Yolanda “He has since been certified , through my therapist, as my service dog. I live with diagnosed CPTSD. He is trained to recognize onset of panic attacks and to distract me.”

“He knows in the gym playing is not allowed although he and I are known to dance. He knows ‘watch out’ as a command when we’re lifting to keep safe. Theodore is confident, hilarious!, currently the keeper of cats since we have 8 (3 adopted 5 fostering).”

He’s also come to love some of Yolanda’s food including avocado, cucumber, carrots and lettuce ribs.

“He can’t be away from me for more than five minutes since his job is to, for lack of better words, monitor me” says Yolanda. 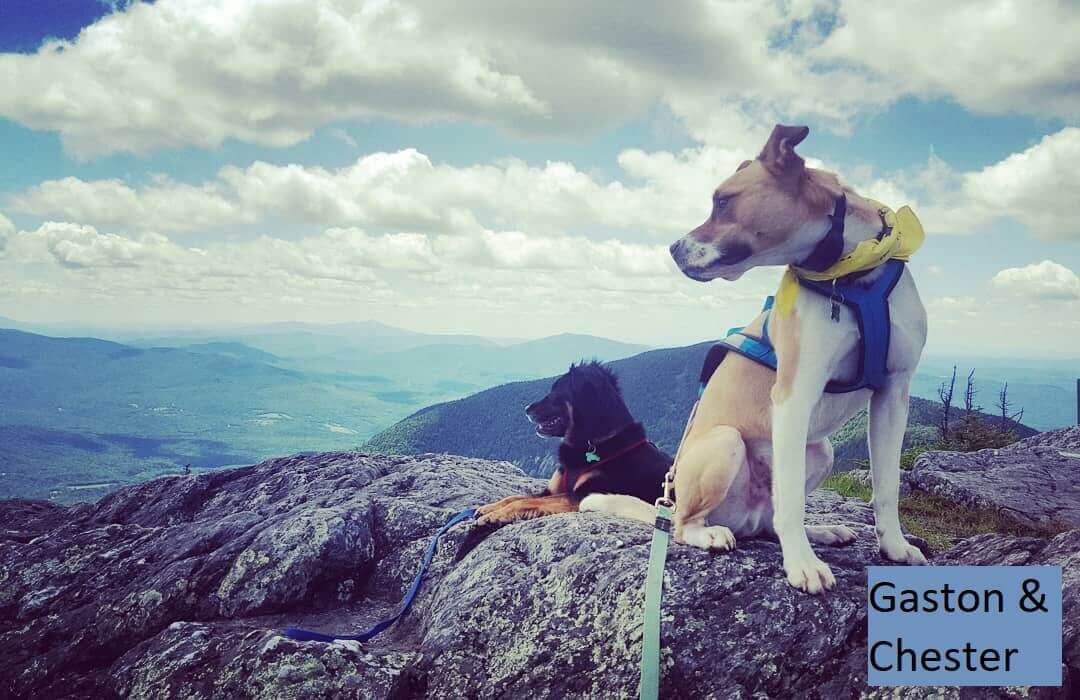 “I had been reading a series of articles from the Guardian about the hidden truth of modern farming” Alister told us. "Then I read the final article about the abattoir and it stopped me dead – I had never considered it – so when I got home I said that was it, no more meat”

He’s since competed as a vegan for the Canadian mountain running team and won some high profile races – including a convincing win in 2017 at a 100 mile event with massive height gain. Part of Alister’s training crew are his two rescue dogs, six year old Gaston and 18 month old Chester.

“These guys are my 100% committed trail running crew, there is almost not a day that goes by without going for a run with these two” says Alister. “Chester has so much energy we often have to go run together twice. These guys have so much personality and loyalty that it saddens me every time to think that they were abandoned.

"Having a dog goes way further than what breed they are and buying them as a puppy. It's about having another family member and giving them a home. So it makes perfect sense to adopt a dog and give them a second chance. Gaston and Chester are huge fans of running in the woods (Gaston particularly likes a muddy stream to cool off into). For them, it's all about living in the moment and a great reminder to do so too!” 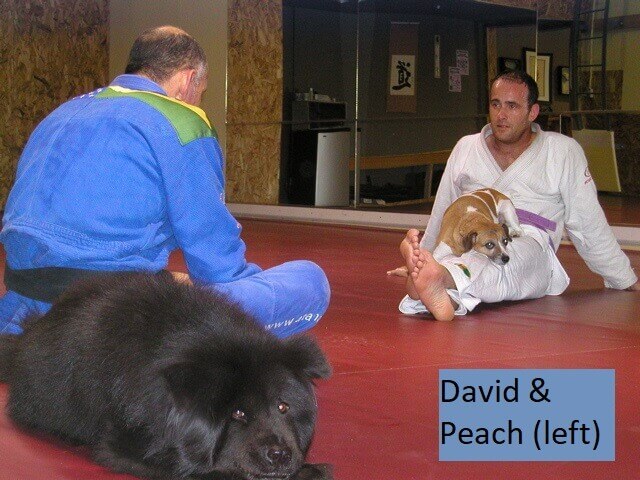 David Meyer was one of the first Americans to reach Black Belt in Brazilian Jiu Jitsu and the first American to win a Black Belt competition in Brazil. He has been vegan since 2000, and as a vegan he’s won four American National Golds and seven World Championship Golds. David also set up Adopt-A-Pet to help shelters find homes for animals and in doing so has helped find homes for countless animals.

David lives near Los Angeles and was in the mountains north of the city when he found an abandoned Chow mix. She needed help so David took her home and she stayed. He named her Peach and she settled in, even coming with David to training, where she sat on the edge of the mat. They lived together for over fifteen years until Peach passed away. She was one of several dogs David has had, although she has a special place in his memories. 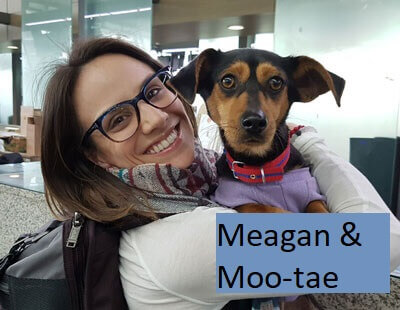 In 2017 she competed in South Korea, where dogs are eaten. Meagan was aware of the cruelty of the industry, and offered to help. She collected two dogs from Free Korean Dogs and left the country with Sara and Moo-tae, as well as a Silver medal. Sara found a new home in Montreal while Moo-tae moved in with Meagan and her husband.

Moo-tae will have misshapen legs for the rest of his life due to the conditions he was kept in. “Most of the time, he just wants to sit in everybody’s arms,” Meagan told a press interview. “He doesn’t even care to play, he just walks up to everybody and wants to be held.”

Moo-tae joins in with Yoga at home and enjoys socialising with other dogs, in a life incredibly different from the one he faced in the meat trade.

Great Vegan Athletes – celebrating the acheivements of vegan sportspeople in diverse sports around the world.