Mega marathon tour for Queen of the Extreme Fiona

What challenges remain for Fiona Oakes after completing Marathon des Sables and entering the Guinness Book of Records? She decided to attempt to run a marathon on each of the seven continents, at the rate of one per day. 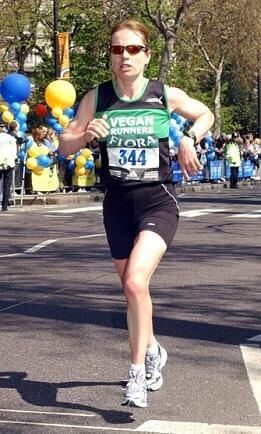 Fiona joined a small group of other runners aiming to complete the tough event. Some were planning to complete the events chained together, setting another record. Fiona decided to join in with this, which meant she did not run at her usual pace.

She also decided to add to her vegan publicity efforts by running them all dressed as a cow.

This started in Melbourne, Australia. The temperature was 35C and the race start of 11:00 meant that the runners went through the hottest part of the day.

Next was Abu Dhabi, a transition which was imperfect as the airline failed to provide a vegan meal. The temperature there was 33C, then the European leg was in Paris where it was much colder – about 2 degrees.

This was a tight day as she had to leave quickly for Tunis in Africa for a night marathon in the dark. New York was next at -4C and snow

The sixth marathon was in Patagonia, Chile, where she planned to complete a marathon before heading to Antarctica.

The runners then flew to Antarctica. At this stage the weather was unsupportive. Visibility in Antarctica was less than 400metres and they were unable to land. There was no improvement and eventually they had to abandon this final stage, meaning that the ambitious tour was not completed.

Fiona is very upset at not being able to complete, although of course she has done everything within her control to do so.

As well as raising awareness, Fiona is aiming to raise money for her animal sanctuary. Please follow the link below and consider sending a donation, however small or large.