The Rolex 24 at Daytona was said to be one of the most exciting finishes in the race’s 50 year history. This meant that vegan Andy Lally, who had previously excelled in this race, had plenty to do. 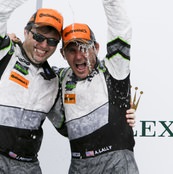 Andy was one of a four man team racing in an Audi R8 LMS alongside co-drivers Marco Seefried, John Potter and René Rast. Seefriend was seeking his first win while Potter and Rast had won once before. Lally had four previous wins.

The car was a new one for all four drivers so they had trained in simulations before the race. It was Andy Lally who started with the new car, in a race promising one of the most competitive fields in its history. Passing on to his team mates, all made positive contributions to place well at the halfway stage.

A crucial contribution to their success was noted as the smooth handling by both drivers and crew overnight, a difficult period for many teams and one in which other teams experienced mishaps. As they moved towards the final stages Andy took the penultimate shift before handing over to Renee Rast.

Leading at the final stages

Leading as the time closed, Andy’s Magnus team were overtaken with just a few laps remaining. Strategies over refuelling had made differed between the teams and while Andy’s team mate was forced to conserve fuel, the new leaders actually ran dry. This enabled the Magnus team to take the lead and continue to conserve fuel until the end, wining by just three seconds.

Andy was delighted with the win and enthusiastically commended his team when he was in touch with us soon afterwards.

“A 24 hour race is truly a team effort" he explained "and the consistecy of the drivers being able to run at 99.9% without making any mistakes over 24 hours of hard racing beats the inconsistency and mistakes of other teams. Our engineering, strategy and race management played a hugh part in our victory as well as having a pit crew that made every single pit stop without a mistake. To win a race that is 24 hours and over 2500 miles by only 3 seconds is amazing and a testament to the ability of everyone on the team to perform well under huge pressure. "

Andy also stressed the importance of food in keeping his performance at the highest level during the twenty four hours of cardio. Over the years he has found an eating strategy which works wel for him, and this doesn't change now.

"I start a big focus on hydrating days before the event as well as eliminating any junk food. I eat a big meal the night before with a lot of protein and carbs in the morning. Between runs I rehydrate and take in a decent portion of carbs with a little bit of protein….We get very little rest and have to manage huge increases and decreases in adrenaline during this time as well."

He went on to explain how the emphasis on driver condition is important because demands on them are growing.

"Through the years this race has become harder and harder to win because the cars we race have become stronger and stronger. This means that they can take more abuse and can be driven flat out the entire time and you have to be able to answer that demand in order to win."

"The last two times we have won the event the margin of victory has been just a handful of seconds. It's like racing someone from Atlanta to Los Angeles and beating them by just a few seconds. There are so many things along the way that could hinder that progress that being 100% on top of your game is the only way you can expect to win."

This adds to Andy’s record as he had already recorded the most win and the most podium finishes in the prestigious race. This recent triumph adds to one of the most impressive records in the history of the sport.