Another vegan Gold for Duhamel

The pair are now twice World Champions and five times Canadian champions, and at Skate Canada started the Grand Prix circuit for the 2016-7 season. 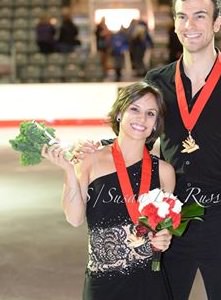 Their technical excellence puts them ahead of rivals in the opinions of most fans and commentators, and they’re known for their attempts to push boundaries. The competition consists of a short and a long programme; rules prevent quad throws in the short programme so they added a throw triple Axel.”

Meagan explained why: “We thought, ‘OK now, how can we increase our base value of the short without a quad? We already do the hardest jump. The only way was to learn the hardest throw triple which is the triple Axel.’ ” Their reputation for challenging themselves also means that they take risks, and this can work against them, as it did this time. Meagan suffered a fall on a different throw.

"I had a moment where I got up and looked at Eric and I was kind of like 'Oh my god, am I going to be able to?'” she recalled. “Because there was still a jump and a throw left in the program, and it's my landing leg. Is it going to support me to do two more jumps?”

It was unexpected because her high levels of fitness means that as one report wrote: “Duhamel, who, like a cat, virtually always lands on her feet.” Her fitness also went on to carry her through, although adrenaline was also credited.

Writing a feature for the Skate Canada International website, Meagan wrote: “In addition to having a blast during our short program, we were so pleased to see that we set a new personal best score of 78.3. We are already thinking about how we can reach 80 points for our next Grand Prix, NHK Trophy.”

As the scores came in, Meagan and Eric took the highest scores for both the short and the long programmes. A strong performance from the Chinese pair scored 202 points although in the end the winning margin was over 16 points giving Meagan another Gold for her collection.

Skate Canada International is the first of a series of high profile events over the skating season. Meagan turned vegan overnight in 2008 and has had amazing success since then. She is also the only athlete to have been a finalist in all four past Vegan Athlete of the Year competitions.

Subscrbe and get vegan sports updates