Julia Hubbard added more bodybuilding trophies to her collection last year and currently sits over a second clear of her nearest rival in the veterans 200 metre sprint rankings for the UK. 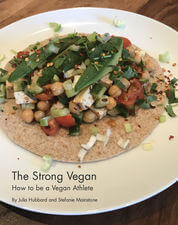 As a trainer and vegan, Julia knows how important food is to aspiring athletes, and in a new project with chef Stef Mainstone is bringing some her wisdom to others.

In ‘The Strong Vegan’ they show some of the recipes new vegan Stef developed as she made the change – under Julia’s guidance. Julia adds nutritional information aimed at athletes and bodybuilders as well as offering tips on making the change. The 130 page book also answers the age-old question about where vegans get their protein.

Julia spoke to us about how the book came together.

“Stef was not vegan until I approached her about the book – but she was a great (and already published) cook and I knew she could help me create great recipes- so I challenged her to go vegan to create recipes for the book. She is also a competitor and we both understand the need for recipes that support athletic vegans so the book has been designed for the athlete, bodybuilder and anyone who works out.

“She sceptically took the challenge and we transitioned her gradually over four weeks then she did four weeks fully vegan- and fully intended to go back to her normal eating after- but she actually decided to continue to eat a plant based diet ever since!”

The effects of the book did not stop there.

“Our three proof readers have already started to change their eating habits as a result of reading the book so we are really proud of what we have put together and are hoping it helps others to transition and thrive on the plant based diet!”

Meanwhile Julia is in training for the athletics season and we hope to bring you news of her success in the 200 metres over coming weeks. She plans of competing at the British Masters Indoor Championships in February and in the Europeans Masters Championships in Madrid later on.

(This link will not work on the kindle app, but if you have a kindle fire it will work on there and upon purchase you will receive an email with instructions to download)