Australian Joel Kirkilis is a vegan bodybuilder who became the Victoria (Aus) bodybuilding champion in 2009. In 2010 he entered the INBA Melbourne Open and the Victoria Class 2 competition, and finished second in each. 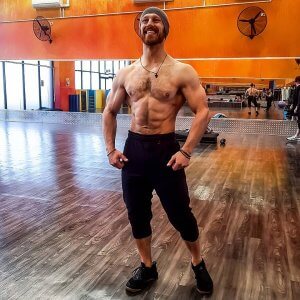 He has since been working on technique and coaching other athletes. “I went vegan because I don’t think it is right to exploit animals in any way for my benefit.”

He’s found it helped him find variety in food.

“ I have discovered so many other foods which are very nutritious and tasty and have helped me not only feel good but also enhance my athletic ability. I have eaten animal products in the past but ever since I cut them out of my diet I have felt more energetic and also feel better morally.” 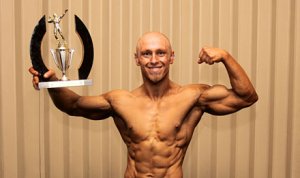 Joel is also an accomplished powerlifter. Competing at 80kg, Joel’s best lifts are: Squat 190kg, Bench 150kg, Deadlift 195kg.  He’s also trained in Olympic style lifting and at 78 kg has snatched 112.5 kg and clean & jerked 135 kg.  By 2020 he had also competed in crossfit. Joel said “it became something I got very competitive with and have enjoyed it ever since.”

Joel is aware of the example he sets in bodybuilding.

“Being a competitive vegan bodybuilder, in a sport which has a significant emphasis on the consumption of animal proteins has provided me with the opportunity to prove that a vegan diet is just as effective for enhancing physical performance yet more importantly it does not involve the cruelty required to produce ‘traditional’ bodybuilding foods.”

Competition – Joel has the shaved head